And the Lord spake unto the the philosopher, "I am the Lord, thy God, and I am all-powerful. There is nothing that you can say that can't be done!" And the philosopher spoke unto the Lord, "Ok, your mightiness. Turn everything that is blue, red and everything that is red, blue." The Lord spake, "Let there be color inversion!" And there was color inversion. The philosopher then spake unto the Lord, "You want to impress me: make a square circle!"The Lord spake, "Let there be square circle", and there was. But the philosopher protesteth, "That's not a square circle! That's a square!" The Lord grew angry, "If I say it's a circle, it's a circle. Watch your impertinence!" But the philosopher insisteth, "I didn't ask you to change the meaning of the word circle so it just means square. I wanted a genuinely square circle. Admit it - that's one thing you cannot do!" The Lord thought a short while, and then decided to answer by unleashing his mighty wrath on the philosopher. (Source: The Pig That Wants to be Eaten, Julian Baggini)
What a fitting coincidence to be discussing about square circles right after reading Flatland! Before engaging in any analysis on whether faith and rationality are indeed compatible, I couldn't completely get the logicality of the philosopher's request. It's like asking for dolpho-crocodiles, a creature that doesn't exist, and if it were to be brought into existence then we can envisage such a creature to have both physical and biological characteristics of a dolphin as well as a crocodile (a dolphin face with a crocodile's prickly thick skin, maybe). Or perhaps a unicorn - which is popularly the cross of a horse and a bird. Horses don't fly, that's their property, yet a horso-bird, aka unicorn, will fly due to the added characteristics of a bird. In a similar way, why didn't "God" just produce a new geometric figure called the square circle, which is nothing but the cross of a square as well as a circle? It can have the characteristics of both a square as well a circle, yet not being mutually exclusive. 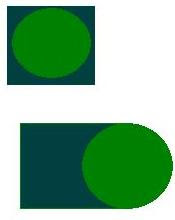 Something like those above? I mean, fundamentally, I don't understand arguing about logicality of those shapes/attributes that don't even exist! And if such objects were to be invented, who is to set the rules of their properties?! Logicality to a great part is what we define and redefine over the years. A thousand years back it was illogical to expect to talk to people disconnected over thousands of miles. Now it's mere commonsense. And if we attributed God to be omnipotent then even the basic rules of nature can be changed, yet with basic rules of logic still holding true. If the laws of nature are changed such that one can walk on water, then all subsequent laws would change accordingly, leading to a redefinition of our perception. Or else nature wouldn't survive, or would it? Something like Harry Potter's world. Despite conjuring an imaginary fantasy land of wizards and magic (that are highly illogical to us) the rules and constraints of magic were beautifully and logically formed by the author, and with these as the foundation, the story was built logically. One can hardly argue that the story was illogical, when the rules of the land were set.

Anyway, the essence of the above excerpt is to question how rational faith can be. Does faith and belief in God still conform to rationality? I recall a nice paragraph from the book, Sophie's World. If we believe that humans are rational beings, if we believe that we reason and act on our thoughts, and that every creation and act around us is due to the result of some thought process, then there should be a thought emanating from some other mind, whose result is this universe and us. As part of rational thought, we humans need to find meaning and the causal nature of everything. According to us it is irrational to have something without a meaning or cause. Therefore the thought, of the logical belief in the existence of a higher spirit, force, God, sounds rational enough to me. Just because we haven't reached the state of conclusively proving the existence of this higher force through our current framework of intellect, (and limited dimensions in which we live) it doesn't necessarily mean that the faith is irrational. One doesn't have to be irrational to believe in God. Many times faith is just the precursor to a logical deduction. Many great scientists of the world would vouch for that.

Of course the common criticisms of irrationality that stem due to a claim of rational belief in God are - 1) why does God allow all this cruelty when he is all loving, 2) Why are people punished if God is all merciful, and is the cause of all our actions? etc. But don't we still try to logically defend and answer these questions to ourselves? We seek more logical beliefs and explanations to iron out the contradictions and fill in the gaps. It is perhaps at this point that the road forks - one path taken by the rationalists who try to rationally find answers whilst holding onto a faith, and the other path being taken by those who just believe in the existence of an explanation and look no further. Is one path more rational than the other? I'm inclined to think that the rationalists' path is obviously more rational, but it might just be my ignorance. Isn't a rationalist again trying to assuage his questions with more speculations, more beliefs, however logical they are contrived to be?

In the end, faith that exists without any reason or rationality as we presently define, seems to remain just a belief, whereas faith that is complemented with some sense of reason and the need to find rational explanations holds more promise to transform from mere faith to pure knowledge. In that regards, faith and rationality can be made compatible by our own sense of reason.

Does the world need a square circle..? if God made that square cirle what will be the purpose of it..? will it just be there to prove there is god or that he/she can do anything.

According to us it is irrational to have something without a meaning or cause.

all that happens/we do is the outcome of our thought processes. when we have faith our thought materialises. that is how all inventions happened. even if the thoughts seemed irrational at that time people had faith in them and proceeded.

faith need not be rational. if it is believed in enough it will find a way itself to become the fact.

The philosopher sounds like quite an annoying guy- I'm totally with God (and you?:))on giving him one whack !:)

Questions of intertwining faith and rationality bring me back to religious concepts- the ideas of karma and dharma, creationism and all the rest of it.. at the end, the logic behind the faith seems as important as the faith itself, however oxymoronic that sounds.

Oorja - Quite true, we've heard of patients being cured from just a placebo drug, all due to firm faith, however the faith tends to be "logical" not necessarily irrational, due to the belief that they were getting the real drug.

SecondSight - I agree, faith needs to be logical to some extent (else it tends to be pure fantasy or hallucination), and I was thinking of the age old debates between religion and science too. But when it enters the domain of miracles, God, faith gets rationalized to a large extent, that the word itself loses touch with rationalism.