Life of Pi - The Movie 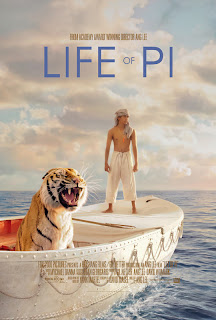 My thoughts on the book.

After much apprehension and skepticism, I decided to watch Ang Lee's Life of Pi yesterday. I'm so glad I did!! It was easily one of my best movie experiences ever!

I remained skeptical of a movie/visual medium representing the weight, depth, and essence of the book - not to mention the horror and gore. But how wrong was I! The screenwriter and Ang Lee have masterfully done justice to the book! It's rare for me to rave about a movie made from a book that touched me. But this movie really shines on its own and complements the book beautifully!

The only aspect that could have been better is the ending. It was a little rushed - I think a couple of visuals would have helped drive home the "other story".  If one hasn't read the book or isn't familiar with it, then it's possible to miss the most important part of the story. The other minor irksome part was Tabu's terrible terrible Tamizh. But for all the attention to detail the movie captured, one can easily look past it.

Nevertheless, I was surprised that the movie touched me in the same manner as the book did. It truly is an awesome rendition of a heavy book. Everything was exactly as I had imagined.

Kudos to the entire team! Suraj Sharma as Pi Patel is fantastic. The music - awesome. And the direction and cinematography - just perfect!

If you liked the book, you surely would appreciate the movie. If you stopped reading the book because you were disturbed by the gore, then the movie will be a refreshing treat for you. But I do think you need to go to that terrible, harrowing place within your mind that grapples with the harsh realities of life and extreme human/animal nature to better grasp and appreciate the essence of the book. Otherwise the movie/book will not have the same punch.
Posted by Neeraja at 12/01/2012 03:07:00 PM 2 comments: