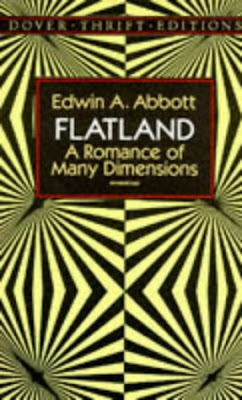 A classic that needs no introduction. I have seen this book on our bookshelf for as long as I can remember and yet I never ventured into even turning a page, for I had seen this book in the hands of intellectuals, of mathematics geniuses and heard them talk about a new abstract dimension in mathematics. Me and mathematics, and that too abstract, never go together in a positive sentence. And naturally I shied away from the book as long as I could. But I'm glad that I finally "faced my fears" by not only reading this book but also marveling at how simple it now seems to try and conceive of another geometric dimension and perhaps many more.

Imagine a land of two dimensions, a world existing inside a geometry book, where triangles, lines, squares and other polygons have a life, a personality, intricate social structures, legislatures and laws...all within the constraints of their two-dimensional flatland. Ha! how bizarre does it seem to us, elevated people of the third dimension. How silly that there could be a degradable world in mere 2 dimensions and how amusing to read about utterly ignorant and pompous flat shapes who assume that their world is the only one to exist and that space beyond 2 dimensions is pure gibberish! The smirk on the faces of 3 dimensional-creatures soon gets wiped away with a mere question - what if you were ignorant of a fourth dimension? How silly would us 3 Dimensional know-it-alls appear to a more intricate creature looking down upon us from a greater dimension and witness all our hullabaloo over a small speck of space?
This reminded me of Plato's allegory of the Cavemen, in his Republic. Plato claimed that what we humans perceive are mere shadows on the walls of the deep caves inside which we reside. Seldom do one of us climb out of the cave to see the sun and the beautiful land beyond the caves, whose mere shadows are the ones we perceive as being real. Yet a person who comes back from such a land of "true shapes" gets ridiculed at, due to pitiable ignorance and tight walls of brick built around one's sense of reason, power of thoughts and imaginations.
The author with his tickling style of satire casually brings out the plausible notion of further dimensions with his charming tale of a frustrated Square trying to grapple with the truth he witnessed in another dimension and faltering at conveying what he witnessed, to his closed minded fellow men. The cruel fate of innovators and thinkers, starting from Copernicus. Since the book is more than a 100 years old, the author's depiction of the social system in the land of 2 dimensions reflects the common norms of society and culture that existed in most parts of the world then (on reflection we can still see remnants of those social structures even in today's contemporary societies).
The descriptions and narrations of the inhabitants of the land of 2D really appealed to the child in me. If I had read this years before, I would have easily gotten distracted, fantasizing about the squares and triangles every time I opened my geometry textbook. I'm probably the only loony who does this, but when I was little I associated each alphabet to a personality of their own, living in their land of English. Somehow the shapes of the letters (and probably the phonetics of some of the words which begin with them) paint a general impression of their personality. The letter "A" for example is an arrogant intellectual, B is the henpecked husband of C, who is an incorrigible spendthrift...and A-H forms one family of the upper class, with I-S forming the middle class etc. I used to have a similar imagination with vegetables and fruits, but that could be the influence of cartoons! But to read about personalities and characteristics of Isosceles, Circles and their little houses, in a "grown-up" book dealing with math-fiction, was just so refreshing to the imagination! And to see it all being strung into a significantly intense concept is like watching Mickey Mouse explain the theory of relativity and me understanding it! How much more creative can an abstract book get? :)
Posted by Neeraja at 6/18/2009 01:32:00 PM